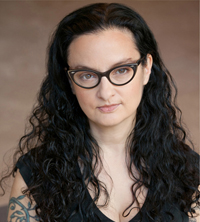 Terry Marks is a New York City-based artist who works in painting, drawing, printmaking & tattoo. She has been affiliated with the international, ReModernist arts movement Stuckism since 2001, and has exhibited with various configurations of the group on three continents, including the Liverpool Biennial, and in Tehran, Iran. After accidentally falling into acting, she can sometimes be seen in films or on television and plays a little ukulele on the side.

Terry studied at the Central St. Martins College of Art & Design in London, England, where she received her BA in fine art printmaking, and at the New York Academy of Art where she earned an MFA in painting. She has been the recipient of several awards for her artwork, including the Whitworth Young Contemporaries, the UK National Print Award from the British Printmakers Council, Young Printmakers Editions, and CCA Galleries Award for Print from Christies Contemporary Arts in London. Terry's work is in numerous private collections in the US and UK.

"Practicing t'ai chi puts me in the same frame of mind as when I'm making a painting. I get to go somewhere far away from myself and the world, while simultaneously, I am more myself and more part of the world than I am at any other time. I am exactly where I'm meant to be, doing the thing I was made to do. The sensation of the experience is more than similar, and they feed each other."