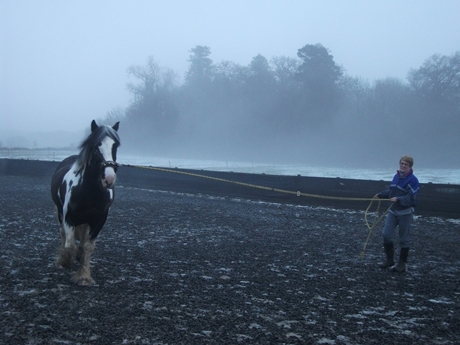 The tai chi self is an extraordinary experiment in living.  It perceives mind and body as one.  It recognizes that we are solid stuff and also immaterial.  To say it in tai chi terms, we are substantial and insubstantial.  These are not dualities but complements, and you can play with them in a tai chi way.  That is, you can let them interact and interlace, and allow them to set you in motion, as we say. Sometimes I am so enchanted by the workings of tai chi in my very bones that I become taller and lighter, and a sense of childlike happiness often fills me up.

From this perspective of tai chi gratitude, I want to note two insights derived from my practice, one attained through perception and the other through intuition.

Firstly, perception. In sword class this past week, taught by the most wonderful duo of Steve Shulman and Bob Etherington, I was watching Bob demonstrate “Reining in the Horse.”  I’m sword illiterate, orientation-challenged from birth, sick of Zoom, confined in an insufficient space between my bed and the bedroom’s bank of windows, and holding too fast to Bob Chausow’s old sword, which is for me too long and heavy.  My shoulders ache, my wrists aren’t beauteous, and there’s no stealth in the feet-sword up-down of my alert cat.  I never know which direction I’m to face, and so I move only as the insufficient space allows.  I am trying my best.  I am just keeping up with the class.

Then I saw Bob rein in the horse.  Nothing that didn’t need to move moved.  Perhaps a breeze had turned him.  And then I saw it—his dantian as the centripetal pivot point of the rotation, even to bringing the sword toward him as he came round.  I felt it in my dantian, an initiating pull through the small of my back.  This is what sword form is all about.  This is what teaching tai chi is all about, the magical transmission from body to body.

That the transfer was relayed via pixels is a testament to Bob’s teaching and my many years of being taught.  I’ve acquired an educated perception for movement, such that my body sees.  My brain has been rewired.  I walk down the streets of New York City and along the aisles of the local Price Chopper in upstate New York, and I feel how people walk.  I watch my tai chi students and feel the stuck hip.  When I touch a student, the student responds.  I’ve become physically literate, and the ability to articulate through touch now seems as organic to me as having known, without knowing I knew, how to hold my children when they were hurt.

Secondly, intuition.  Both my husband and I, though we were rarely out and always double-masked if we needed to leave our apartment, somehow crossed paths with Covid-19.  He suffered and recovered; I didn’t suffer and didn’t recover for months afterward.  The list of things I couldn’t do was almost as long as all I did before, including my daily qigong and tai chi.  I couldn’t fill my lungs.  The intake of air stopped at the sternum, and the exhale staggered.  There was neither cool breath to lift my arms, nor warm breath for the dantian to pump the qi.  My arms were cement.  My neck was roped with tension.  Why was I even trying to take a shoulder width?  Better to sit at the kitchen table and watch the birds flying over the field than to stand on silenced feet and chase something that’s gone.

Among the nightmares of the virus was how it diminished my tai chi body almost to a vanishing point.  Finding and developing it had taken so many years.  At the start, I hadn’t listened to words like “dantian” and “qi” because I understood them as metaphors or as descriptions of forces sought but not actual—emulations, at best.  Over time, qigong and tai chi revealed these as language markers for capacities already resident in myself but previously unknown.  This, I think, is when the tai chi body starts to quicken for real.  So where was mine now?

This ends well.  I followed my intuition, prior knowledge lodged in the gut, and I did what I’d been taught to do.  I started with a wobbly shoulder width and stood, and stood, and stood, until intuition yielded physical allusions to my tai chi body—my feet softened and the floor began to send messages, a pulse beat in my right foot, a weak vibration traveled from the small of the back to one shoulder.  One day, I felt a sensation of heat like sunshine reflected.  Remember this? my body asked.  Yes! Yes, I did.  Every morning, I stood and breathed.  I cried a lot.  Every time I felt sick and defeated, I stood and breathed.  When I observed standing and breathing to be more restorative than the doctors’ pills, I threw them out.  Weeks went by.

One day, in his online class, Paul Campbell said to relax the muscles in and around the arm pits to keep the upper thorax open in order to cultivate breathing.  My body took in that advice like sunshine full on: stand, open/relax and open/relax and breathe.  Soon enough, my shoulders widened east-west, arms lofted, and eventually the breath went as deep as it had gone before the virus, and my dantian filled me right up through my spine and into my head.

At some point, I remembered one of my teachers saying that tai chi is a form through which to summon and gather qi and then to express it.  I realized that I could use the qi!  I could put qigong and tai chi to the task of restoring myself from the havoc of the virus.  I decided to trust absolutely the physical sensations that my body was recollecting, even when they often felt as hesitant as the initial flutters of a fetus.  Like the fetus as it grows and kicks, they became more reliable, and totally identifiable for what they were—signs of growth and strength.  Then I simply let go and allowed the qi to rise and float me closer and closer to reanimation and release from the virus.  I hadn’t lost what Paul Campbell calls “vitality,” which I understand as the seed of life possessed of all living things.  And I wanted mine back.

Healing means the monster that invades you can be bested by your immune system, often with the help of medicine and scientific methods.  I’m all-in with modern medicine, and my doctors gave as much as they had, which, frankly, with this virus wasn’t much.  That my life was never threatened and I never needed hospitalization, was determined by how the virus hit me and how well my immune system functioned.  Still, not-dying means recovering from the thing that didn’t kill you.  And that was a long walk on a hard surface.

This is where self-healing comes in.  It allowed me to use resources within myself to gain an advantage over the monster, also internal.  Better said, I authorized myself to use my own reserves.  I had to admit the virus could doom me, but, nevertheless, I cared for myself and allowed others to care for me.  The effects of qigong and tai chi were essential to my recovery.  That they were resident body-deep and available, that I’d cultivated them over many years, was enormously empowering.  I really could help myself.  Relaxing, I now realize, means having confidence in one’s innate and gatherable qi, to the extent that one can restrain fear and let the qi move.  Relaxation allows release and circulation of qi. It kept body and soul together when something came to cut me off at the feet.  Qi is not a metaphor.

Written in gratitude to two sustaining classes, Paul and Joan Campbell’s Wednesday class, and Bob Etherington and Margaret Matsumoto’s Friday apprentice class.  Gratitude also for my husband David Voremberg, who took such good care of the lunatic in the house shouting, I want my life back!