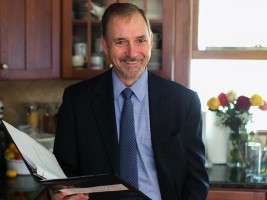 Robert Etherington earned his Bachelor of Music degree from Ithaca College in 1978 and a Masters of Music degree in 1983 from The University of Massachusetts, Amherst. Bob has performed as a singer in over one thousand concerts throughout the United States and abroad, including more than two hundred performances with the New York Philharmonic. In 1991 Bob completed a four-year certification program to become a Feldenkrais Practitioner. He has had a thriving practice helping more than a thousand people with pain and movement issues in group classes, private lessons, and public workshops.

Bob Etherington began his Tai Chi studies in 1981 in Amherst, Massachusetts, with Eric Johnson and Dan Ogrydziak. He took his B1 apprenticeship in 1983 and began teaching in the fall of that year. Bob moved to New York in January 1984 and began studying and teaching at the NYSTCC on West 13th St while absorbing all of the Arica work through the eighth level. Bob currently teaches two classes a week and regularly practices sword and push hands.

Mission: While involved in the healing arts for well over twenty years, I have often been asked the following question; "What can I do to help myself?" With many tools and a bit of experience at my disposal, I have provided individual assistance to many people. But, we as a school have a treasure chest that is not getting out to so many that need it. Professor Cheng recognized that the real value of Tai Chi Chuan was its health benefits, not its martial arts applications. As a school, I agree and think that we can do a better job of getting this life, enhancing work to desperate people for its benefits. In addition to the Form, we have Roots and Branches, The Eight Ways, and Psychocalisthenics that can be learned quicker than it takes for most people to understand the Form. In my opinion, we have only begun to tap the root of the treasure that we have at our disposal. I want the opportunity as a member of the Tai Chi Foundation board to help fulfill Patrick's and the Professor's mission of making this work available to all that can use it.