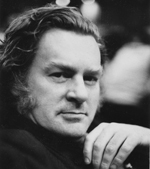 Patrick Watson (1935-1992) already had a long history with martial arts, Hawaiian swimming, and the theater when he began studying with Cheng Man-Ch’ing in 1966. He studied with him for nine years, becoming one of his eight most senior disciples. In 1976, Patrick founded The School of Tai Chi Chuan (STCC) specifically to train teachers to teach the Professor’s tai chi chuan form; in 1979 Patrick founded T’ai Chi Foundation, Inc which now manages all programs including teaching, training, research, and development. Over the next 16 years, Patrick guided the growth of the STCC into an international school with branches in seven countries.

In 1992, Patrick passed away and left The School of Tai Chi Chuan and Tai Chi Foundation to continue his legacy. We have both struggled and grown while finding our new identity.  Now, years after his death, we still share a strong sense of continuity and community.  We enjoy working together in a historic community of many teachers instead of one. We are very aware of the responsibility handed to us to uphold our part of this lineage. And we seek to embody tai chi principles to honor the spirit of this exquisite art, and to share what we know with others.